Hit podcast ‘Dirty John‘, from Los Angeles Times & Wondery, is billed as “a true story about seduction, deception, forgiveness, denial, and ultimately, survival”. It features music from Tracy Bonham’s Masts Of Manhatta album, the track “Devil’s Got Your Boyfriend”.  Released in 2010, Masts Of Manhatta was Tracy’s fourth solo album but her mainstream breakout hit – “Mother Mother” – went to Number 1 in the US Billboard charts in 1996, from her debut album “The Burdens of Being Upright”.

Tracy Bonham’s album “Masts Of Manhatta”, including ‘Devil’s Got Your Boyfriend’ is available on Lojinx here. 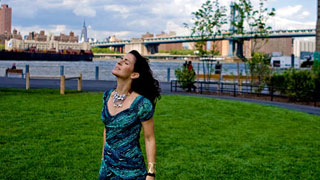 “I haven’t written much about our upcoming adoption but today and for the past few weeks we have been informed of even more delays, this time heartbreaking and nerve wracking.

Without getting into the details, I have been pretty down lately.
Well, today I decided to write myself a song to cheer me up. I realized this could help other parents who are going through similar situations with adoption – domestic or international. It has become so incredibly hard. What about the babies? They wait in orphanages until the bureaucracy is over and presently the wait is excruciating.

I know our boy will come home soon. But until then…. here is a song
for me, for you, for anyone who will listen. Thanks. I will figure out a way
to keep people in the loop without too much drama. Tracy” In each 5 part episode of “Dubway Days”, musician Ben Arthur goes into the Dubway Studios with a special guest for one day of song-writing and producing. At the end of each day, no matter what they went through to get there, they emerge with a song.